Getting it right: learn how American Girl created its beloved characters

As a company devoted to developing strong, relatable characters that serve as role models for today’s girls, American Girl is committed to ensuring that every aspect of a character’s story and product world is authentic and accurate. As part of that meticulous process, our editors, authors, designers, and other members of our creative teams often rely on the generosity, expertise, and guidance of character-specific advisory boards.

Board members can include historians and museum curators, cultural leaders, practicing professionals, and scholars. When possible, our advisory boards also include individuals who themselves experienced key events, like Melody board member Dr. JoAnn Watson (above), who grew up in Detroit during the civil rights movement of the 1960s.

“I felt very connected to the story line of Melody Ellison and how she was impacted by the ’60s because I was 9 years old in 1960, was active in the black church (like Melody) and experienced early involvement in the civil rights movement by marching with my grandparents as a 12-year-old in Detroit’s ’63 march to freedom.”

Representation: Nothing About Us Without Us

In creating our Native American character Kaya, we sought permission from the Nez Perce tribe to tell Kaya’s story. With their approval and suggestions, we established an eight-member advisory board that included Nez Perce tribal elders to help ensure the historical accuracy and cultural authenticity of Kaya’s story and products.

“It has been a wonderful experience working with the gentle, knowledgeable, and culturally sensitive people on the staff at American Girl. We were asked to be on the advisory board to retain a true sense of the unique Nez Perce history and culture in the Kaya products, and we are grateful to American Girl for their willingness to listen and to respect the wishes of the board. We commend them, because in our opinion they have gotten it right.”

The advisory boards read and comment on book drafts, review and offer feedback on the character’s product line, and guide the doll’s physical characteristics, from skin tone and eye color to hairstyle. Sometimes this entails going the extra mile, as when Josefina board member Felipe Mirabal cut off a lock of his own hair to ensure we got Josefina’s wig color right.

Nanea debuted in August 2017, but—believe it or not—work began on her series in October 2015! Part of the process included getting insights from an advisory board featuring a Hawaiian language professor, Pacific Islanders—like Dorinda Nicholson, who as a young girl witnessed the bombing of Pearl Harbor—hula experts, and others. These advisors introduced author Kirby Larson to the term “talking story”—the idea of dining on, or savoring, a story. Larson says:

“Researching Nanea’s world provided new appreciation for how much children were impacted by World War Two. One day, Nanea is a carefree island girl; the next, her life is constrained by blackouts and barbed wire. Despite that, she never lost her sense of aloha, which I found remarkable and inspirational.” 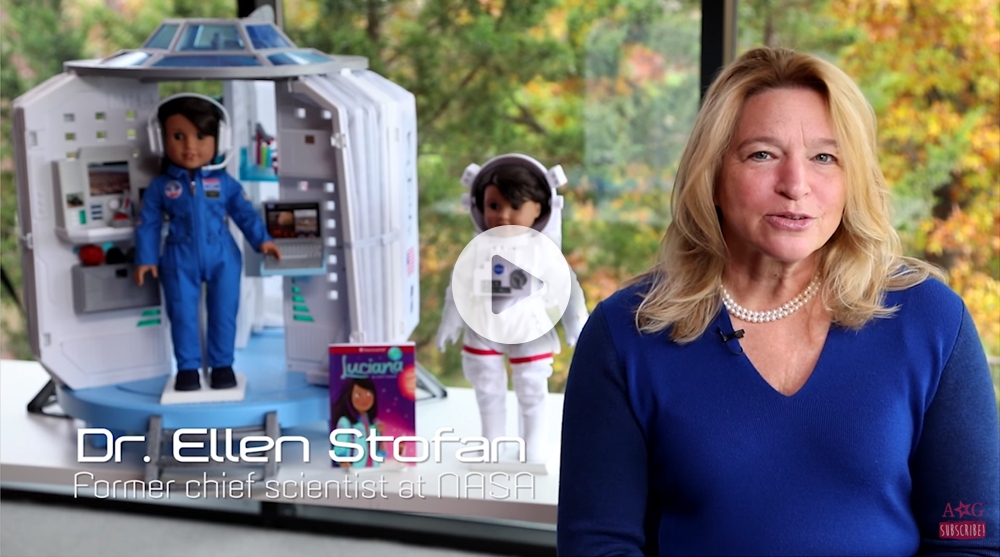 “It is so important to find exciting new ways to inspire our next generation of space explorers. I always want to encourage girls and boys to pursue their dreams, no matter how big, and I think it helps to show how those dreams can become reality for any kid.”

The Insight of Others

Whether American Girl develops characters with the guidance of a full advisory board or the help of a few knowledgeable external reviewers, our staff conducts extensive research to ensure every element of the character’s world is authentic: information from books, museums, vintage newspapers, old magazines and catalogues, and other sources offers a compelling picture of what the period looked and felt like.

For example, when researching Maryellen’s perfect ’50s style, product designer Shelley C. hunted antique stores, flea markets, and even her grandmother’s sewing box for inspiration. All of the fabrics used in Maryellen’s outfits are based on real 1950s fabrics that Shelley found.

American Girl is grateful for the knowledge, insight, and commitment of our board members, whose invaluable expertise has helped us to introduce beloved characters that offer girls a better understanding of their world and themselves.